The ability to record all calls and messages is crucial for the financial world’s version of essential workers—relationship managers. 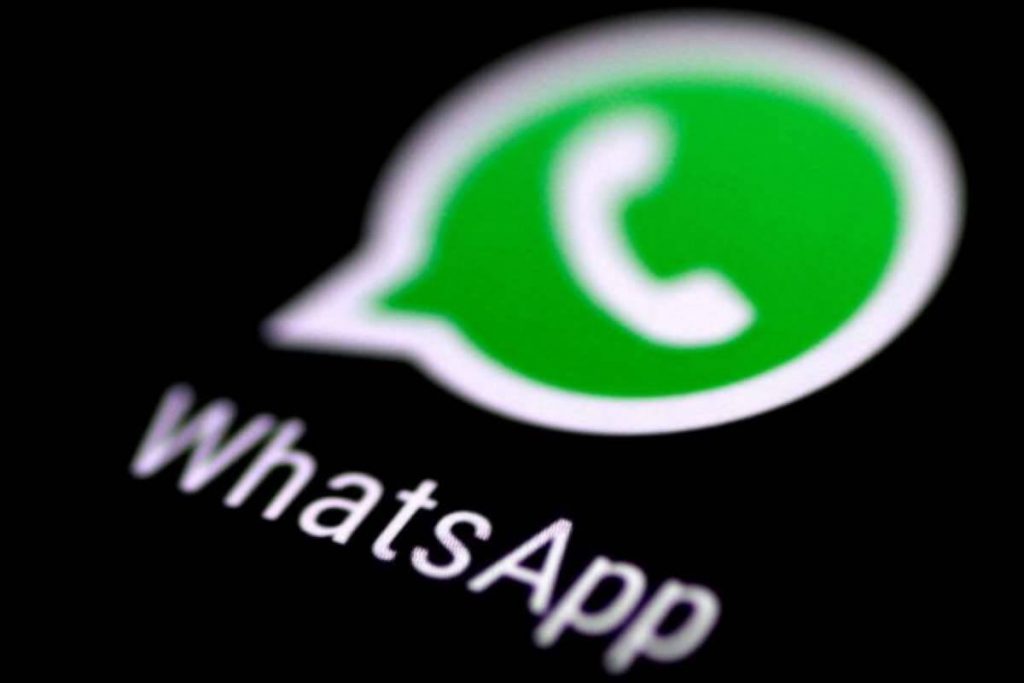 In January of 2021, Britain entered its third lockdown in a year. Only this time, regulators were prepared.

As the great horde of Britain’s financial services professionals boxed up monitors and potted ficus to trudge back home, the Financial Conduct Authority issued a statement: “Given the extensive duration of these arrangements, we now expect you to record all relevant communications (including voice calls) when working outside the office.”

In other words, welcome to the new woefully impermanent state of work. Fluctuating between home and office is now normal and nobody gets a pass. That means a lot of things. But chief among them, it means customer-facing financial teams are under tremendous pressure to adapt because their firms’ futures now depend on it.

There are many trends large and small that have pushed financial client services to adapt and made call and text recording essential. There is regulation, yes. But the biggest reason began long before the great pandemic.

Customers are curiously insistent on being able to text or use consumer messaging apps. Eighty-two percent open every text message they receive, and 85% say they prefer SMS over calls or email. At the same time, the long-presaged wealth transfer from Baby Boomers to Millennials has begun in earnest—$30 billion in assets are changing hands—and individuals born after 1981 are now the largest generation in the workforce. Their preferences, honed during the first dotcom boom, are different.

Pair all that with the fact nearly half the world’s working professionals have experienced prolonged periods of working from home and you have a massive transition in behavior. People are conditioned to expect speed and empathy from companies. They have learned that yesterday’s rock-solid policies are actually quite elastic. They’ve learned that some bankers are just a text away—and wonder why all aren’t.

Customers have learned that some bankers are just a text away—and wonder why all aren’t.

Change has come for the office, too. Sixty-one percent of financial services CFOs say they plan to make remote work permanent for roles that allow it, says PwC. But therein lies the issue. Most relationship managers are in a strange new world armed with all the same old tools—they’re burdened by all the old regulations and unable to serve clients in the ways clients want.

Clients desire convenience. Plenty is going on in the world and their personal lives and they’re increasingly thin on patience and frustrated with out-of-office voicemails and clumsy interactive phone trees. Their relationship managers aren’t nearly as available as they’d prefer, so they push to message them on consumer messaging services, from WeChat and WhatsApp to Line, Telegram, and Signal. “Workers typically take their cue from clients,” reports Financial News, noting how workers have a difficult time resisting this draw, despite there being harsh penalties for communicating outside of secure channels.

And those clients will only need their brokers more in the coming years, and will only push harder on them to message. Two-thirds (67%) of clients were unprepared for the recent market downturn. Three-quarters (76%) of their account managers say those clients tend not to recognize risk until it’s too late, reports the news site Natixis.

Clients need their relationship manager. Relationship managers want to meet those clients’ needs but are shackled to the phone and email. We might call this a “call gap” and it has widened into a yawning chasm. It’s why FinTechs are feasting on many firms’ revenue. 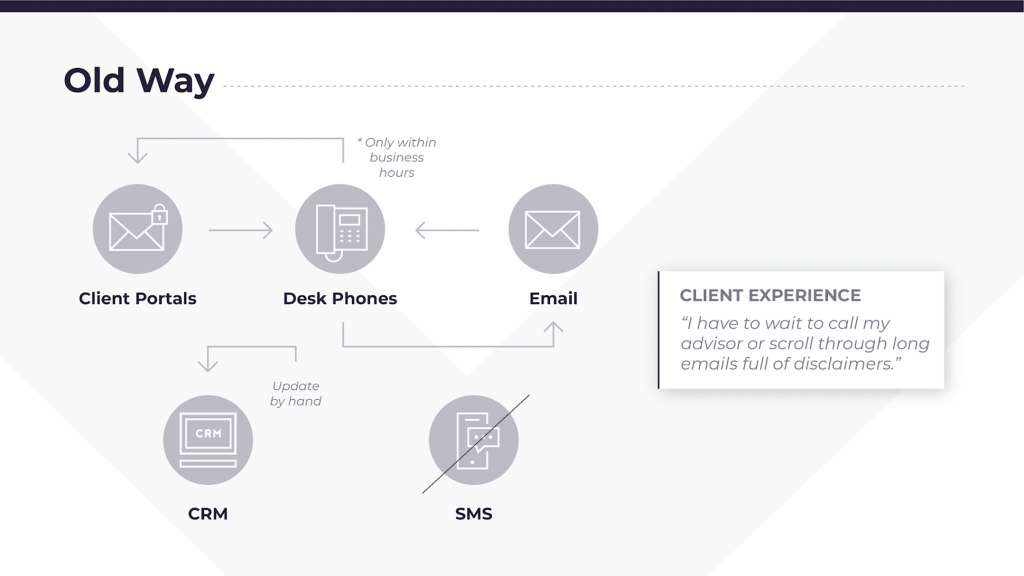 In the last quarter of 2020, marketers seemed gleefully unaware of the pandemic unfolding and general turmoil across the U.S. Does that suggest an immunity? No, say experts. Merely delay.

The IMF estimates global GDP to have declined by 4.4%, or $6.2T last year. “The drastic contraction in the global economy has already meaningfully diminished loan growth and payment transaction volumes,” reports Deloitte. Financial institutions will soon be staring down ledgers full of increasingly distressed assets and jockeying for a diminishing share of investable wealth—and that presages an era ruled by the politics of the armed lifeboat.

What will save some institutions is their service. Of advisors who excelled at not only maintaining their clients but growing their portfolio during this past year, 54% said frequent client communication was a critical factor. Fifty-eight percent also said the primary reason they lost clients was failing to meet their communication expectations.

58% of advisors said the primary reason they lost clients was failing to meet their communication expectations. – Nataxis

To return to our intrepid British relationship managers now working from home, the admonition to “record all calls” should be interpreted as a plea—don’t stop communicating. It’s also a call to compliance teams: Enable your relationship managers. Allow them to easily record their calls and messages and free them to maintain whatever fraying relationships they still have. To do the opposite—to clamp down restrictions—is to only force them onto increasingly niche platforms and create a giant institutional blind spot.

In the case of WhatsApp, institutions that have only just now adapted to tracking those messages are watching their traders and analysts flee to the smaller messaging apps Line and Telegram, reports Financial News. Bans have produced precisely what you might expect—a black market.

Firms where relationship managers have been unleashed to call or message, on the other hand, report improved client acquisition and the agility to do things your competitors can’t—like offer emotional support via text, or send trade updates by, yes, WhatsApp. You cannot wait around for regulators or compliance teams to axe your top performers who go against company policy and communicate with clients on WhatsApp. And you can’t follow all the rules on old technologies and still maintain your business. Get out ahead of it. Find tools that make the types of communication clients demand compliant—and free your team to talk.

In other words, in the new world of flexible work, don’t let anyone shoot the WhatsApp messager. Instead, give them more territory. That’s a person who’s adapting to the new, impermanent future of work, and the firm’s existence depends on it. 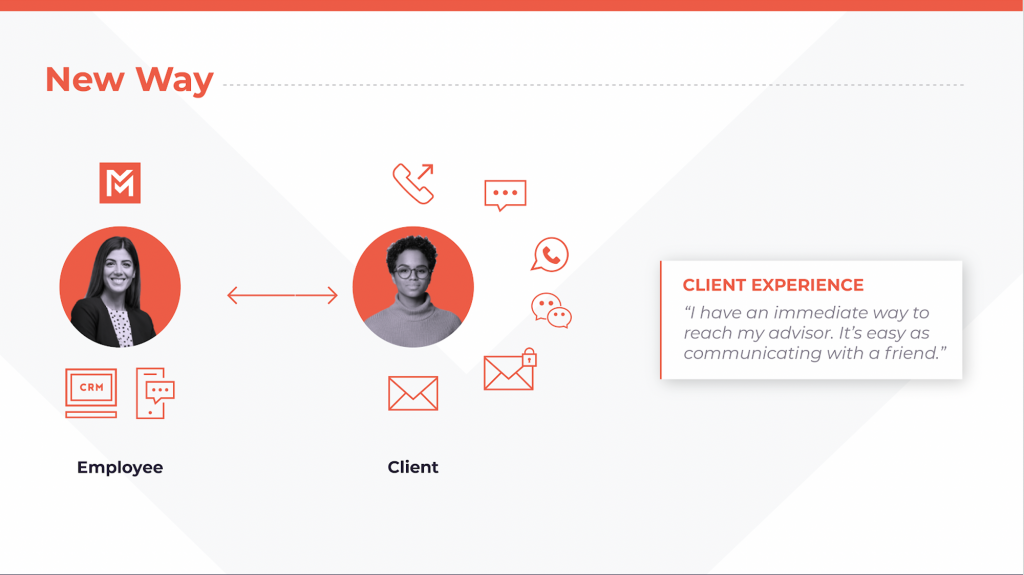 Want to free your team? Read A Leader’s Guide to Compliant Mobile Messaging. 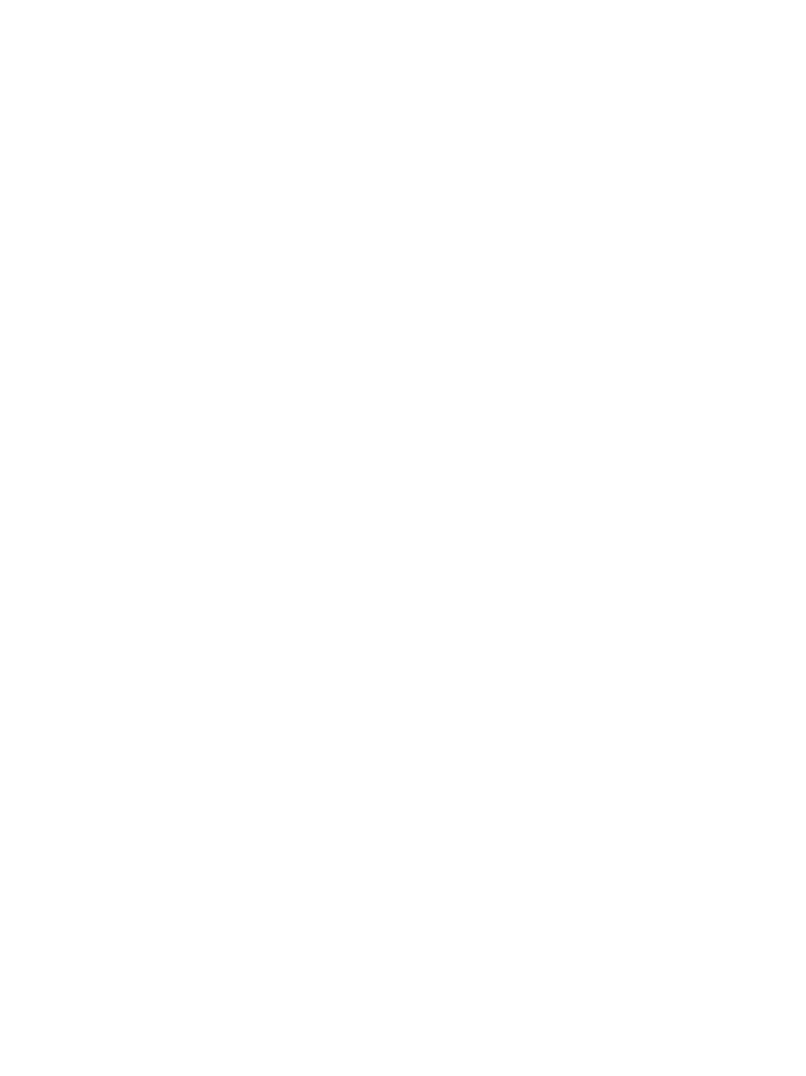